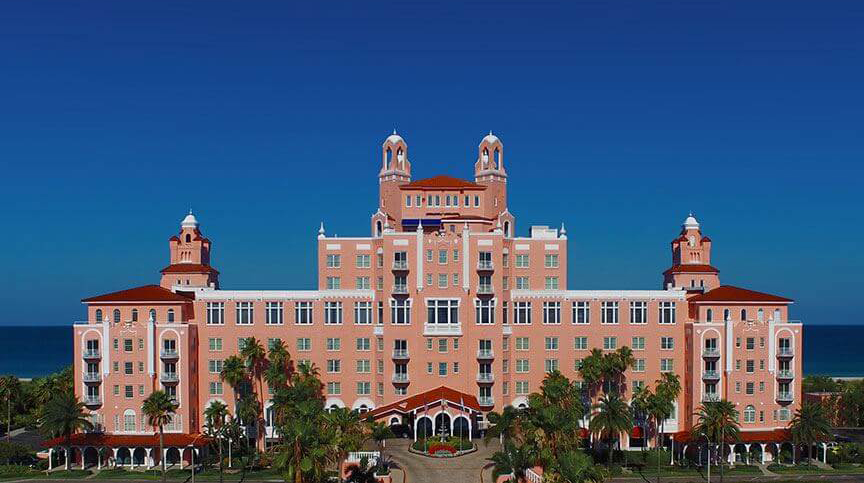 Loews Don CeSar Hotel is also referred to as the pink palace, and is located within the St. Petersburg area. The hotel offers visitors a lovely water view and is equipped with luxurious, modern and classic amenities. Sited on the St. Pete beach, this iconic hotel is one of the signature pink resorts in the area. The hotel was built way back in 1928, and still remains one of the remarkable landmarks located on the Gulf Coast. This is attributed to its ornate architecture and distinctive color. More importantly, maritime charts have made the hotel a point of reference.

The hotel has approximately 277 luxurious rooms, which includes 40 suites. It also provides an excellent view of the Boca Ciega Bay or the Gulf of Mexico. One of the most outstanding features about this hotel is that the National Archives has listed it as a historical monument, while the National Register of Historic Places lists it among the North America Historic Hotels. In addition, for over 30 successive years, the Don has received the AAA’s Four-Diamond award. If you try using keyword tools on the hotel to find the cheapest cost, it’s possible! Sometimes they don’t always “rent” out the hotel rooms on the website… until you chance upon some hidden rooms that can be used!

The Don attracted the biggest stars of that era after opening up its doors. Some renowned people who visited the hotel include Al Capone, FDR and Scott Fitzgerald. The hotel survived the Great Depression after the signing of a three year spring training contract with the New York Yankees. The cash paid by the Yankees helped in keeping the Don afloat while other businesses were going down due to the harsh economic times. The hotel also survived the Second World War after it was converted into a hospital to cater for the soldiers returning from war with injuries. It was later on turned into a convalescent center for the Air Force.

The changing faces of the hotel makes it very famous in the history of America. There are also stories about the sighting of ghosts within the facility, which are mainly associated with the conversion into a hospital during war. The hotel had deteriorated severely in 969 and remained in this condition up to the early 1970s. It was closed for renovations that cost $7.5-million and reopened in 1973. Over the years, the hotel has received numerous facelifts to maintain its beauty and elegance. The hotel celebrated its 75th anniversary in 2003 and continues to offer guests excellent services that can be traced back to the late 1920s.

Don has a Spa Oceana that is about 11,000-square-foot, which offers salon treatments, in addition to the full spa menu. It is also equipped with a rooftop garden that overlooks the Gulf of Mexico, as well as a Whispers Room. All these facilities aim at ensuring visitors relax and feel rejuvenated whether they were booked for an evening, a day, or a full holiday. The hotel also has an enchanting beachfront pool that creates a sense of serenity and calm. Visitors should consider sampling the Maritana Grile, which is a unique meal that combines organic and local seafood ingredients. The meals are prepared by experts and will definitely excite the taste buds. The décor of the hotel features huge salty water aquariums that are filled with various colorful Florida native fish.

Don CeSar is one of the top choices for visitors to Florida. Make this legendary Pink Palace your next rest stop when you travel to the Gulf Coast and have a relaxing good time here.